I only realize now that South Bend, Indiana, reminded me of Booth Tarkington, a writer from the late 19th, early 20th century, who wrote stories and novels about his Indiana. Many of the homes and buildings that I saw there this last week dated from Tarkington’s time, solid, old structures seemingly impervious to the passing of time. 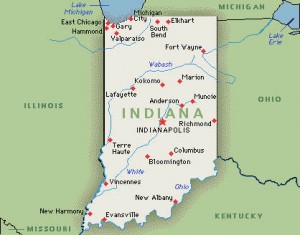 South Bend is the home of the University of Notre Dame and on our day off, I walked the six miles to and back from the school. This is the Main Building on campus. That dome is covered with paper thin gold leaf. 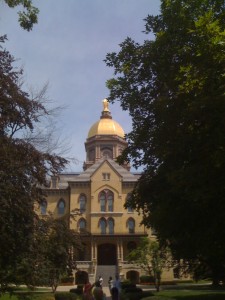 The building has five floors and the inside dome has this painting. 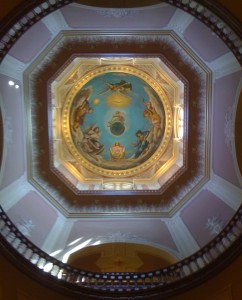 How much of a coincidence is this? in Warren, Ohio, last week Peter, Dave and I visited a museum of two brothers, the Packards, who built their motorcars in the late 19th century. In South Bend, Indiana, right down the street from our hotel, i walked by the home of Clement Studebaker, who with his brother Henry made  automobiles. Clement and Henry were blacksmiths and they made good carriages before they turned to car manufacture. So, two brothers in two separate towns. I visit them a week apart. They later become partners in the Studebaker/Packard enterprise. I mean, isn’t that a little Twilight Zonish? This is Clement’s house. 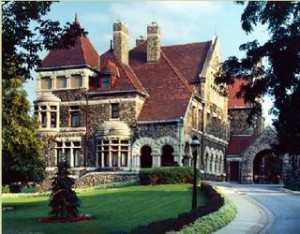 And this is a Studebaker. When this car came out in the 1950s, the styling was so different from other cars in the USA. The Studebaker looked Italian because an Italian designed it. 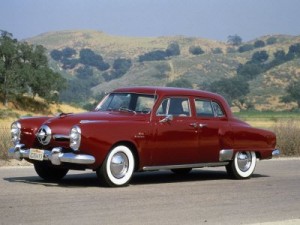 Tim Murphy, our agent, gave me this pass. This image is quickly becoming iconic. 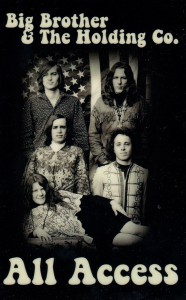 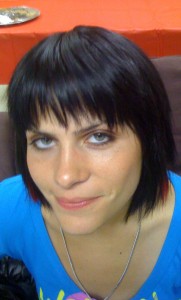 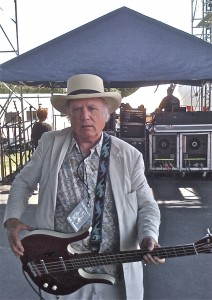 Dave Getz in the rent a car on the way to the hotel. 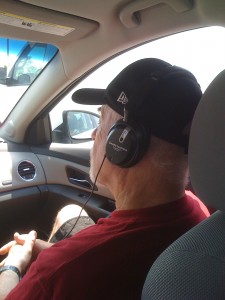 Too cool for school. Ben Nieves, whose name means “snows,” but sweats would have been more like it. Our hottest gig so far this year. 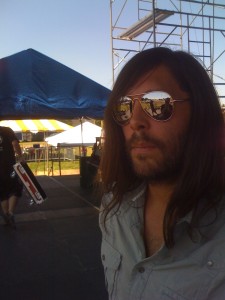 Jude Gold, Cathy Richardson, Sam Andrew. Cathy always does a good set. She and Ben are our Scream Team. Jude Gold is a fine guitar player and an editor for Guitar Player Magazine. He recently wrote a most interesting article on Guthrie Govan. Jude, who reminds me of Joel Hoekstra, says that he has been playing guitar “since the Carter Administration.” I told him that I have been playing since, er, well, the Truman Administration, and have had a band since the Eisenhower Administration, so there. Am I proud of that? No. All it takes is living awhile. Anyone can do it, although a great many have not done it. 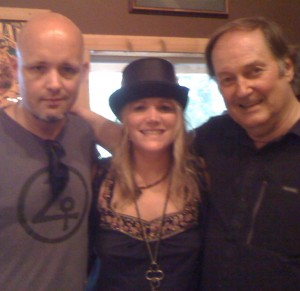 All my life I have studied Japanese, and i know less of it now than ever before. I take a little children’s book on the road and read it in the car. Those six large characters across the top are called kanji (Chinese letters). The Japanese, with their highly inflected language, chose to write it with Chinese script, the letters of a completely different language (far more different than English and, say, Romanian). it would be like writing Latin (quite similar in structure, by the way, to Japanese) with pictographs. And now generations of Japanese children have to memorize these “letters,” really words. When a Japanese graduates from high school, s/he is expected to know 1,000 of these. To read a newspaper, you have to know, perhaps 1,500 – 3,000. A PhD in Japanese, now I’m guessing, would need to know 15,000 kanji. This is a feat of memory unparalleled in our culture. Why wonder about Japanese graphic skills? My study of this language led to my becoming a painter. The six big kanji, by the way, mean (left to right) pillar,  concentrate, wear, talk, short and coal. The kanji are like Latin or Greek roots in English. They are used in combination with other kanji to form completely different concepts. “Hydrography” is a word you can break down into “hydro-” water and “graphos” write. The same is true with these kanji. On the highway in Japan, you very often see the directive “chuu i” (Caution). The second kanji from the left. I have circled the combination on the very left under this character. Japanese is, BY FAR, the world’s most complicated major language, both as to grammar and to writing. As I say, I know less of it now than when I began to study it at age 15. 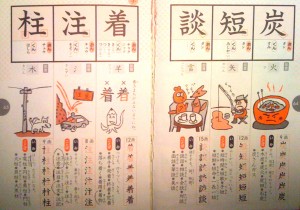 On the beginning of my walk to the University of Notre Dame in South Bend, Indiana, I came across this signpost. The main arteries, north and south, crossed here, a block from my hotel. Today the main north and south arteries, I am just guessing, are probably Interstates 35 and 80. I know that 35 runs through Austin, Texas, and goes on up into Minnesota, and 80, which must be a child of the Lincoln Highway, seems to run East West from New York to San Francisco. 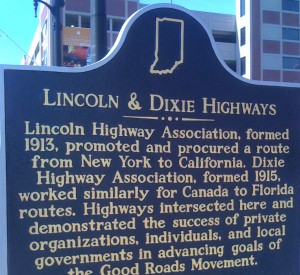 This is one good guy, Donnie Baldwin. He plays drums with the Starship, but mainly he’s a decent human being. Always good to see Donnie. 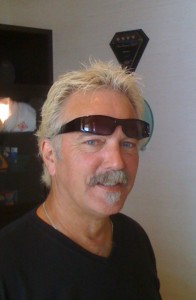 Fito de la Parra from Canned Heat adjusting his drum set at a sound check. Fito, like Frida Kahlo, is Mexican/Austrian or Austrian/Mexican, so he’s having a whole war right inside himself. Both Fito and Frida are good human beings and I am encantado de conocer los dos. Very lucky and happy to know them both. 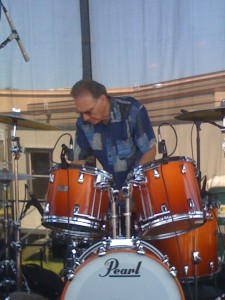 Ben Nieves, the fierce one, nailing it on Ball and Chain. 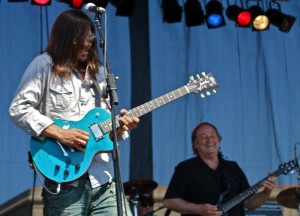 Harvey Mandel. checking his effects at the sound check. Harvey, the master of tone, always comes on with Big Brother and does his sound check while we do ours. Canned Heat are cannibals when it comes to sound checks. They all descend on the stage, serious and full of purpose, to make sure their sound is right. 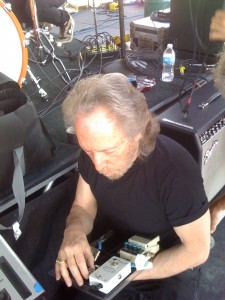 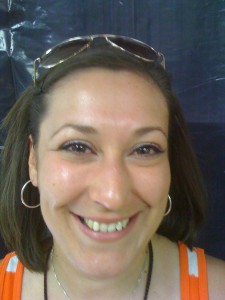 We played this set in Naperville. Is it hard to read? One of these days, I am going to reduce it to letters. D  C  N  C  B  S  H  W  P  B. I bet we can read these. Or, semaphore flags, remember those? We did all right on these tunes. Ben and I played Summertime in C minor, you’re welcome, Cathy, and we did it almost as well. I have said before that these singers never realize that C minor is very different from G minor or A minor where Janis did these tunes. It’s an entirely different idea, and, god forbid, that we should depart from playing it perfectly in this imperfect universe. “Oh, so that’s what it is.” You bet, Cathy. That’s what it is. 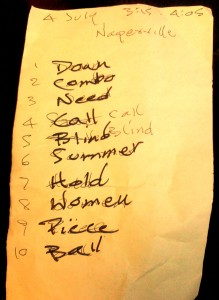 Noah Murphy, probably trying to relax after a day of July 4th fireworks. For Noah, this is slowing down. It’s like visiting your grandparents, remember? 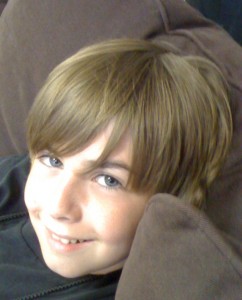 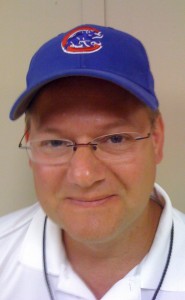 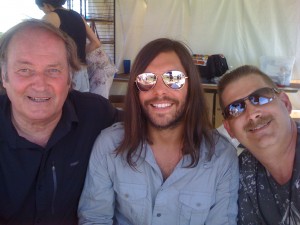 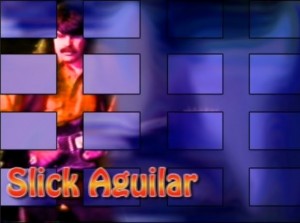 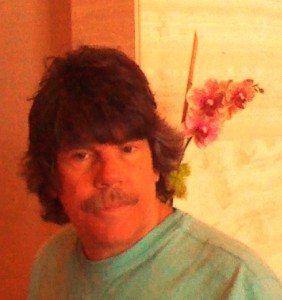 Such a strong face. This is Snorky, Michael Eisenberg. Competent, efficient, in proportion, matter of fact, he’s all right, Jack. 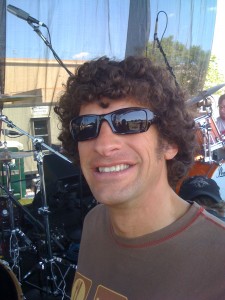 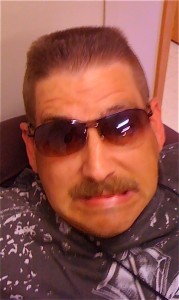 Someone handed this to me in Ohio. I assume that it is real and redeemable. After all, this is the Midwaste, right? Everyone’s honest and clean. No hidden agenda here.

Ben told me to put this in my blog, so voilà. 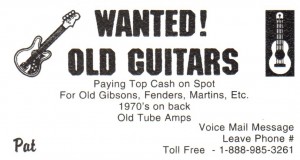 How I learn Italian. Reading is the quickest way for me. I read what I can, and underline words I don’t know, then later look them up in the dictionary. This is how I learned to read English, so I figure it will work for other idioms. This is a rather amusing passage by the way. 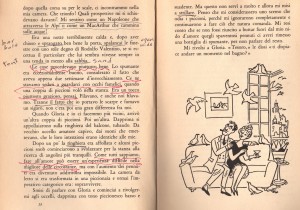 Ahhh, if only ‘t were true. All access to a life of happiness and contentment? 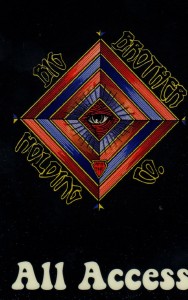 Hey, where’d you go? I didn’t mean to go all psychedelic on you. C U soon. 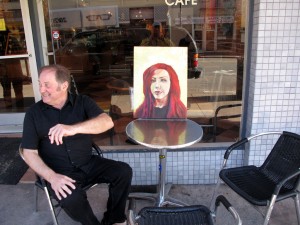